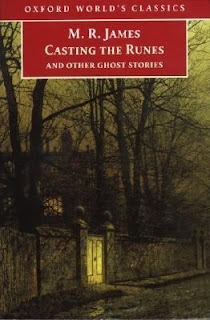 "'... I do hope that horrible man won't find out that Mr. Dunning had anything to do with the rejection of his paper... Karswell won't know his name, for Dunning hasn't published anything on the same subject yet. The only danger is that Karswell might find out, if he was to ask the British Museum people who was in the habit of consulting alchemical manuscripts; I can't very well tell them not to mention Dunning, can I? It would set them talking at once. Let's hope it won't occur to him.'

However, Mr. Karswell was an astute man."

Another entry from The Century's Best Horror Fiction, this time from the year 1911. M. R. James's horror stories tend toward ghostly subjects, but my favorite of his stories, "The Ash Tree," is about something with far more legs than most ghosts. Likewise, the story this review is focused on, "Casting The Runes," isn't as much about ghosts as it is about magic. Black magic. The kind of magic a bitter man, after you tell him his writing isn't up to par for publication, might use to place a certain kind of curse on you. A curse that might just end up with you torn limb from limb, so that those who find your savaged body might mutter and talk of "...savage dogs, and beasts escaped out of menageries...".

I've not read nearly as much M. R. James as I should have. He's a huge inspiration of two of my favorite writers*, after all! And while I'd thought I'd read "Casting the Runes" before, I didn't remember it unfolding quite the way it did—there's a sort of detached, scholarly feel to it, as if you're reading a reporter's take on the events. The story frequently breaks from scenes with announcements like "This much in the way of prologue," or "It is not necessary to tell in further detail the steps by which Henry Harrington and Dunning were brought together."

The way the curse created by the casting of the eponymous runes plays out is pretty fun, and those who have played Pathfinder #26's adventure, "The Sixfold Trial" will doubtless find some of the plots of "Casting The Runes" familiar... as might those who have viewed Sam Raimi's Drag Me to Hell or the old British movie Night of the Demon. Which makes sense... since all three of those stories are based on "Casting the Runes" to a certain extent. Of those, only Night of the Demon (re-released in the USA as Curse of the Demon) is a relatively faithful adaptation of the original story.

*For those playing the home game—H. P. Lovecraft and Ramsey Campbell
**It strikes me that if I keep reviewing stories from The Century's Best Horror Fiction... there's probably gonna be a lot of As given out...
Posted by Bigfoot Country at 8:00 AM