There's something creepy about fish. Sure, they're delicious, but look at their faces! Those big staring eyes... the gasping mouth filled with teeth... the scales... yeah, they're creepy. So it's no big surprise that there's been quite a lot of horror stories about fish people over the years. I've grown up with fish all around me—my father's a retired commercial salmon fisherman, after all, and in those years I've seen plenty of the strangest and scariest fish the Pacific has to offer. Sharks, eels, lingcods, cabazones, eels, hagfish (puke!), sunfish, flounders... the list goes on. All of them are creepy in their own way 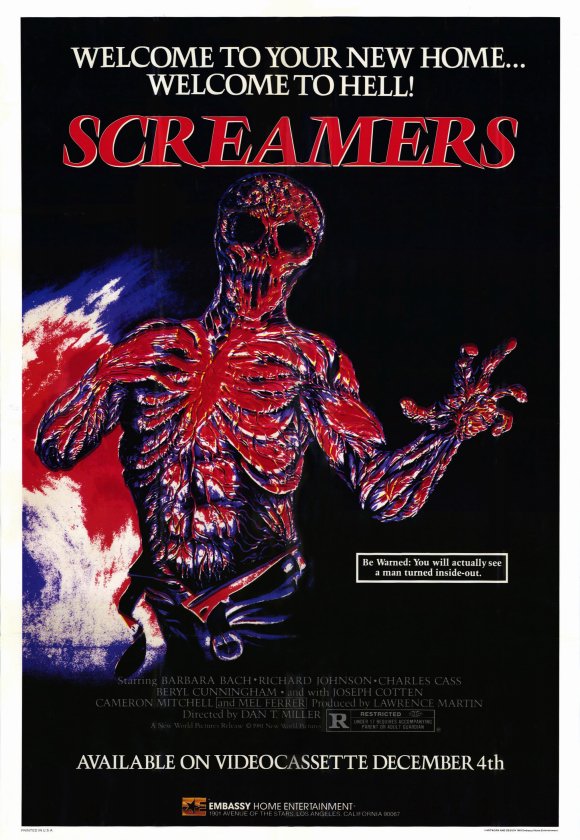 Of course, it's to H. P. Lovecraft that we must go to for the classic story about fish people. The concept of icthyic humanoids appears numerous times in his stories, but never to the extent of the deep ones in one of his best tales, "The Shadow over Innsmouth." Since then, there's been a LOT of entries in the genre... some great, like "Creature from he Black Lagoon," some fun but not so great, like "Humanoids from the Deep," (a movie that was filmed in the town of Noyo, about 45 minutes north of where I grew up), and some that are just plain awful.

Back in the day, my dad and I would rent movies every Friday to watch on the VCR. Invariably they were horror or science fiction movies. As the '80s continued to barrel head first into the age of video, more and more choices came up. I'd seen the box for "Screamers" (no, not the Peter Weller movie of the same name, although that one's kinda bad too) several times. The image of a man who'd been turned inside out was certainly eye-catching, and so eventually I rented it, eager to see all sorts of horrific reverse-zombies.

Now... the movie starts out fine. With some folks looking for pirate treasure, only to run afoul of zombies... but then WHAT? They're kiled by a fish man? How are there fish men in my inside-out zombie movie? Turns out, the movie's NOT about inside-out zombies, but about a mad scientist who wants to turn people into fish-people slaves to loot Atlantas. Which, now that I think about it, is a pretty rockin' movie plot.

But I was looking for those reverse zombies. And in the end, the movie itself was bad. Maybe I would have liked it better had it been advertised under it's original title, "L'isola degli uomini pesce." Or maybe if it'd not promised me inside out people.

Not "Blood Waters of Doctor Z" bad, but close.

Yeah. We need more good fish-person moives! There's a remake of "Creature From the Black Lagoon" in semi-permanent development out there at Universal, but looking at all their other reboots of their classic monster movies over the past decade or two... I'm not holding out much hope.

Posted by Bigfoot Country at 11:24 PM