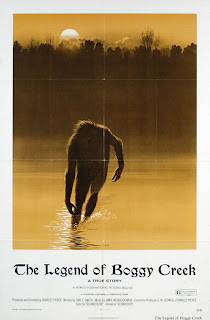 Not all Bigfoots are built the same.

For example, the Fouke Monster, known perhaps more widely as the Boggy Creek Monster, has only three toes. That's pretty unusual, especially considering pretty much no other big hairy hominid prints have three toes. Could this mean the Fouke Monster is a mutant? Or is the one that terrorized the people of Fouke, Arkansaas back in the early 70s merely deformed? Or, perish the thought, are the Fouke Monster tracks the work of a hoaxer who didn't do his homework on basic Bigfoot (and basic primate) zoology?

In the end, it doesn't matter, because the Fouke Monster is the scariest of the Bigfoots. Partially because it lives in a swamp, arguably the scariest of all terrains. Partially because stories about encounters with the Fouke Monster tend to be a lot more agressive that most Bigfoot encounters are. But when you get right down to it, the reason it's scary is because of "The Legend of Boggy Creek."

This movie was more than just a drive-in feature that achieved unexpected popularity and success (7th most successful movie of 1972 in fact... also the year I was born!). It seems like it spawned an entire generation of cryptozoologists. It certainly did a number on myself and my sister, back in the late 70s when it showed up on TV now and then. I once convinced my younger sister to stay up until midnight to watch the movie, and she made it barely through the credits. The combination of the forlorn cries of a loon, the raspy croaking of bullfrogs, the swampy visuals, and then the eerie sound of a monster howling somewhere in that swamp as a young child appears to run for his life from an unseen terror were too much. She went to bed before the credits rolled.

I did not. I watched the whole movie. I've been having nightmares about Bigfoot peering through a bedroom window (one that's at least 7 feet of the ground, mind you) ever since.

Posted by Bigfoot Country at 12:20 PM